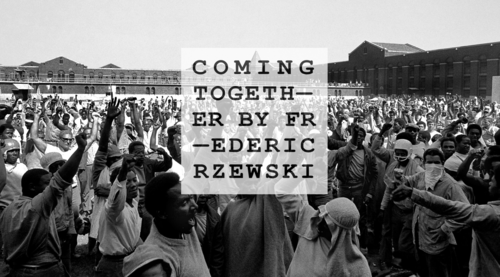 Frederic Rzewski’s Coming Together is a startlingly beautiful and deeply political work for spoken voice and instrumental ensemble. The text for the piece originates from a letter by political protester Sam Melville, written while he was in prison in the Attica Correctional Institute; two years after this letter was written, he was killed in the Attica Prison Riots, one of the most important events of the prison rights movement in the United States. In this light, Melville’s observations—”the indifferent brutality, incessant noise”—continue to be particularly relevant in today’s climate of political extremism, racism, and dysfunctional incarceration systems. Here, Rzewski has transformed the text so that it encompasses both the raw and the political, as well as the abstract and existential.

The brainchild of pianist/composer Gabriel Zucker, indie jazz orchestra The Delegation continues to break new ground in New York’s dynamic music scene. Combining Zucker’s metric complexity and maximalist approach with the melodic stylings of indie rock, the group’s impressive roster of jazz players forge a unique and emotionally immediate sound, representing a singular approach to improvisation in the 21st century. The ensemble’s musical philosophy has been profiled at length by the Ottawa Citizen, the Jazz Gallery, and the American Composers Forum. The Delegation has performed throughout the Northeast, Canada, and Europe, and Zucker’s compositions for the group have received awards from ASCAP and the American Composers Forum.

In October 2016, The Delegation released Evergreen (Canceled World), Zucker’s impassioned 12-movement composition that serves as the band’s sprawlingly ambitious debut record. One of the only contemporary 2016 releases on ESP-Disk’, the singular record appeared on top-10 lists and was hailed as a “fascinating form of sonic installation” in a 4.5-star review in Downbeat. Awarding the record 4 stars, All About Jazz raved that Evergreen “totally lives up to its larger-than-life sweep and scope.” The World Music Report wrote: “In Zucker’s almost confrontational writing I find the vision of one who is hugely expressive. Here is a young man with a profound sense of tone and colour and how it can be wrought from diverse instrumentation to be affectingly ‘cantorial’, expressive and hugely symphonic too.” With protean production by Zucker and pop producer Chris Connors, the nearly-two-hour record features everything from angular rhythmic grooves to Radiohead-inspired soundscapes to jarring electronics-infused chamber music to enigmatic lullabies.

The Delegation’s equally grandiose sophomore record, Leftover Beats From The Edges Of Time, was recorded in December 2017, following the world premiere of excerpts at Weill Hall in March 2017. Leftover Beats will be released early next year.