tanzschreiber : writing on dance : christoph winkler and dancers embody the sounds of julius eastman to the fullest 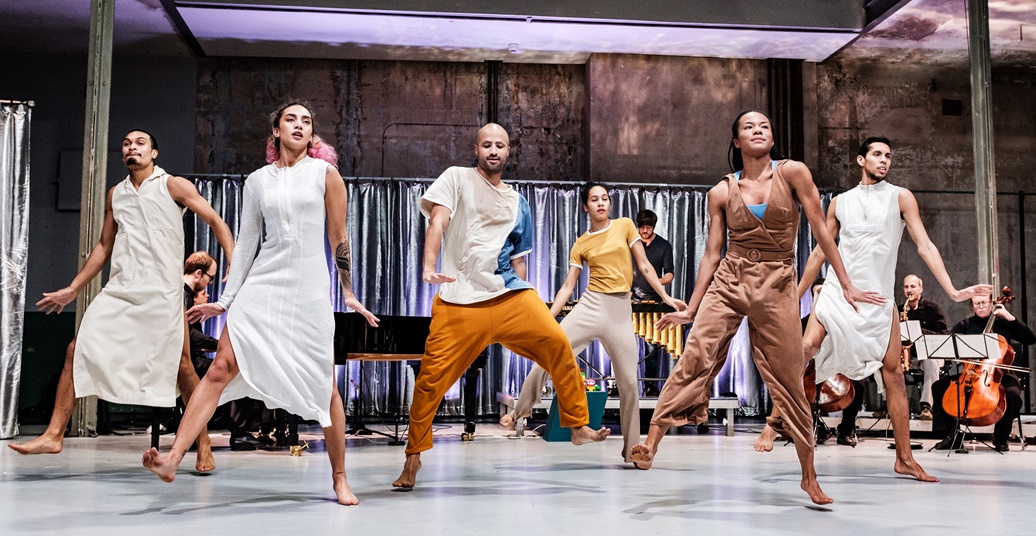 The past year has seen a revival in performances of the work of Julius Eastman, the American composer, musician, singer, performer, and sometimes dancer, who fell to an early death in 1990 at just age 49. Unlike most of his contemporaries, Eastman was a gay black man in a largely white, heterosexual, masculine world of classical music composition. 1  While Eastman experienced success during his life for his music—minimal scores with organic tendencies and sometimes spiritual conceptualisation—much of Eastman’s music was lost in his eviction and eventual homelessness. However, thanks to fellow composer and performer Mary-Jane Leach, who worked with Eastman in the 1980s, and who began to recollect his work in the late 90s, material from Eastman’s life continues to emerge. 2  Mary-Jane Leach and Renée Levine-Packer’s book on Eastman, Gay Guerilla: Julius Eastman and his Music, published in 2015, has since been followed by a growth of interest in his work, including both performances in the US and abroad, with Berlin’s MaerzMusik opening their festival with an evening devoted to Eastman’s work earlier this year.

Berlin-based choreographer Christoph Winkler, who has been familiar with the works of Eastman for some time, was inspired by the reissuance of “Femenine”—recorded in 2016 by the SEM Ensemble—for his recent creative project. In “Speak Boldly: The Julius Eastman Dance Project”, Winkler has taken three of Eastman’s scores, “Gay Guerilla”, “The Holy Presence of Joan d’Arc”, and “Femenine”, to create his newest work, a tribute to Eastman’s sounds and ethos.

“Gay Guerrilla” begins, strikingly, with four pianos on stage, dancers clustered unevenly at each. The work begins slowly with the light, intentional, repetitive sounding of notes. As the music steadily, preciously, and precisely accumulates, so too does the movement ofthe dancers. The dancers’ movements accumulate sporadically, off-balance: they replace one another, shift the space, throw it off balance, and regather the energy. On the stark white floorthey whirl between the four pianos, their movements bending our minds toward different planes of musical focus and complexity. We see and hear so many simple differences at once. Their young, lithe bodies twist through breaking, salsa, folk, ballet, and true modern dance—Karima El Amrani is notably beautiful in her diaphanous yet bold movements, her striking creative propositions accompanied by something like shyness. Words like triumph, delight, rare, pedigree, modernism, post-post-modern-modern find themselves scribbled into my notebook. The firsthalf hour closes with the feeling that I have seen a true coming together—on that note, Eastman, too, worked with Rzewski—of classical and contemporary, but additionally of time and place, music and movement, habit and impulse. I wonder if we even need words at all. I feel enlivened, and in awe, but somehow alone, as if I am standing within a very beautiful piece of architecture.

The second piece, “The Holy Presence of Joan d’Arc”, begins with two performers standing on stage: “Saint Michael…Saint Catherine… Saint Margaret… said…. Joan said… when they question you… speak boldly” they incant, recalling the three saints who spoke to Joan prior to her trial. Their voices overlap and challenge one another as they create multiple meanings through their collage. Poised across from one another the performers look strong, statuesque, almost alien. Jahra ‘Rager’ Wasasala’s presence is particularly strong: in her stillness, she appears a truevessel, her speech seeming to emerge from deep below ground, travel through her, and spring forth.

After the words fall to silence, six cellists emerge, seat themselves in a semi-circle, and begin to play as the two performers morph from prophets to gargoyles, their limbs scrunching and unfurling as their faces distort and feet smoothly shift on the ground. A woman two seats down from me sits in rapt attention, hands clasping face, as she watches the monsters dive through the bowed notes. It feels like anexhilarating, if ever-slightly-too-long, ride on bumpy waters through a storm. The dancers, lit from the sides, move back and forth in front of the musicians, but neither use that limited space particularly artfully, or dare to break out of the piste by moving diagonally or forward to the audience. If this is intentional, it is unclear, and rather things feel muddy and exhausted by the work’s end.

After a pause, we reenter the hall to find a line of musicians and seven performers already onstage. “Femenine”, lost until recently, begins andends with persistent, jingling sleigh bells. We settle into the space just listening for some time, before one performer (and previous Winkler collaborator Zen Jefferson) rises to bring a vibrant, chaotic, improvisatory dance that leads him all over the stage and into a deep sweat. Eventually, the other six dancers—until now posed, like two proud kingdoms, diametrically opposite in trios—begin to find their way into movement. Thus begins the rest of the 70-minute long piece, with the dancers accordioning in and out of group dance formations. It’s a party, for sure, but it’s unclear whether we are or are not a part of it. So, like in situations in which you don’t know what to do, we watch: with interest, with pleasure, with curiosity, with (fleeting) boredom, with (definitely) hypnosis.

Once we have really settled into this wave, Jefferson reemerges with a mic. At first I am shaken by this rupture of the sacred sound-dance symbiosis on stage. His words drop like a stand up comedian’s: Precise. Clear. Hooked intonation. With pauses. No laughter. And what he lists for us are a litany of daily indignities, examples of jokes behind closed doors and workplace names confused. Because you are different, because you are other, because you are black. Clearly, slowly, and unmissably, he unfolds for us, by example, not by lecture, how racism hasn’t subsided but has been domesticated, softened, made everyday and insidious. He shows how it functions, how it punishes. We match up what he says to our memories, our experience, our complicity. He puts the mic down, resumes dancing; our hearts are racing. And then, some joyfully, some playfully, some plainly, the dancers twerk. They twerk, and they twerk, and they twerk. And as I watch these exuberantly beautiful bodies, my mind explodes with associations. But as they keep on twerking, and shaking, and bumping, what I am left with is this healthy, beating, pulsing image, and I am touched to the point of shaking with courage and hope for rebirth through insistence. As the movements and the notes fall away, we are left with the insistence of that small shiny bauble ringing out on stage, often covered by louder, more aggressive sounds, and not always heard, but always, and ultimately, insistently there.

Eastman is (becoming) famous for his quote from his 1976 interview with the Buffalo News in which he states his goal: “What I am trying to achieve is to be what I am to the fullest: Black to the fullest, a musician to the fullest, a homosexual to the fullest”—or, as Adam Shatz reports, Eastman’s “aim was not merely to make himself heard but to make himself seen.”3  From the sparkling revelations of “Gay Guerilla”, to Joan d’Arc’s guttural spirituality, to, most astonishingly, “Femenine”, which not only was a force in its own right but also brought all three works into new, related perspectives, we have heard, seen, and, I dare, say, thought and felt in new ways. To do so is no small feat, but ”Speak Boldly: The Julius Eastman Project” succeeded in just that.