tanzschreiber : writing on dance : peter stamer on the dances that make us 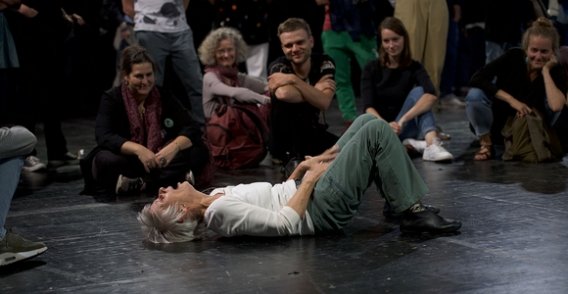 An interview with Peter Stamer

On the closing evening of Tanznacht, Silke Bake and Peter Stamer present “A Piece You Remember to Tell—A Piece You Tell to Remember.” In each of the two versions, three storytellers speak and move with closed eyes, recounting and re-enacting a choreography which moved them. Fellow dancers watch them intently before taking the mantle of storyteller and relaying their own version in an intellectual, artistic game of telephone.

The work is oral history in action, and sprung from an interest in and desire to take time to think about, articulate, and reflect on dance practice, and, specifically, the last 25 years of dance in Berlin. Descriptions range from Mathilde Monnier & La Ribot: Gustavia, 2008 (selected by Cooney) and Eszter Salamon & Christine De Smedt: dance #1/ driftworks, 2008 (Zouk) to Meg Stuart: No longer readymade, 1993 (Sieben), Maria F. Scaroni: display, 2012 (Pleyer) to Anne Teresa de Keersmaeker: Work/ Travail/ Arbeid, 2015 (Golonka). Raphael Hillebrand brings an especially powerful re-telling of Hofesh Shechter’s Sun, seen in 2013. His version, interpreted by Christina Ciupke, Matteo Marziano Graziano, and Anna Nowicka, is full of humour and absurdity, but also the darkness of the original piece.

While some retellings are more legible than others, each brings something new and special to the way in which we remember and think about dance; indeed, even taking the time to do so, and to do so collectively, is rare. Significantly, on the 40th anniversary of Tanzfabrik and under the Tanznacht theme of “the echo chamber,” “A Piece You Remember to Tell—A Piece You Tell to Remember” is a quiet but poignant commentary on the ways in which history is told, retold, morphed, misshapen, embellished, collapsed, and, ultimately, re-presented.

Sasha Amaya: This is a complex work which has a very set, even rigid, structure, which allows a lot of flux, surprise, and improvisation in between. What were the origins of this piece? What inspired you to organise this work?

Peter Stamer: Silke works mainly as dramaturge and curator, I mainly as theatremaker, and we sign that piece collectively. The first staging of this project was preceded by and developed in different workshops for dancers and choreographers at the Tanzkongress Hannover in 2016 under the theme “Zeitgenossenschaft.” The German word Zeitgenossenschaft means a comrade of the same time, being a contemporary of the present, implying a notion of beholding time as a sort of witness. If I am your Zeitgenosse I have been infused by more or less the same cultural experience, have lived through somehow the same conditions and implicitly know what you have gone through. I become memory myself which I need to share with you and your co-presence of time.

[More basically,] the clue to the project is actually in the title: “A Piece You Remember to Tell—A Piece You Tell to Remember.” Often when you meet people after a show and ask them “So, how was the piece?” the answer is, a lot of time, unsatisfying. You get often an evaluation—it was good or it was bad—or a short thumbs-up or thumbs-down judgement. Rarely do people take the time to actually describe what they saw – which could be of great help to work through and understand what they have actually experienced.

Stamer: In some of my work as theatremaker, I have applied an approach of working with eyes closed, especially when it comes to storytelling, creating, and imagining. One can focus and is not inhibited by the control of the gaze of either the audience or the co-performers. I find it fascinating that the one talking and imagining with eyes closed seems to be in another world, as if she sees something no one else can behold, and thus she is needed as storyteller, as someone who bears witness to that invisible world.

Closing one’s eyes thus connects with a visuality we don’t have access to when we roam the world with eyes wide open. Images become after-images, yes, and there is something after the image, a sort of remembering what we just saw, and after a while what we just saw turns into an active production of a visual by piecing a world together.

This production is something intimate; having the eyes closed enhances the impression of being intimate with (his)story and with oneself. Being intimate with history (with a small letter h) is a narrative that comes out of that singular body that yet has been soaked and also traversed by decades of training and body knowledge, by emotions and experience, by discipline and personal encounters on stage, in the studio, and the world out there. So these bodies [retell the story they have been handed down by the previous dancer, but they also] tell a story about themselves, and their ways of telling that story vary a lot.

Amaya: The cast is such a rich collection of dancers, choreographers, makers, and teachers from the Berlin scene. How was the piece curated? How did you select who would tell stories?

Stamer: We asked two sets of three choreographers with diverse backgrounds and cultural experiences, styles and practices, yet who were all somehow affiliated with the “contemporary dance scene of Berlin.” We approached them by sending them a mail in which we asked them if they would up to remember a piece they would like to re-tell and re-enact, a piece they had seen in the last 25 years in Berlin which had a strong impact on them, something that had left an impression on them. And that they have only ten minutes in their respective slot to perform and thus would have to make decisions in regard to how they describe, how they tell, how they re-enact that particular show.

Amaya: How did you decide which dancers would follow them? Were the order and teams set from the beginning or did the teams change? It seemed that both the audience and the story re-tellers were kept in the dark about the “original story” until the end of the work.

Stamer: Once we had the first narrators (three starting off each of the two performances) and witnesses (who are the dancers who listen to and reinterpret the first telling of the dance) we made the order of who would follow whom, and revealed the order on the day of the performance. We didn’t want anyone to speculate on what the predecessor would do and who that would actually be—as well, we wanted to keep up the suspense and excitement! This process took longer than expected: we had quite some different orders and had actually a lot of fun putting the people together, with considerations such as: What if this one follows that one? Would that be exciting in terms of individual practice? How would that coincide in terms of representing diverse dance or performative techniques? Etc. And, last but not least, we didn’t want people in one narrative thread to remember the tale from rehearsal [so we had to mix them up]. This is why Silke and I were the only ones next to the first narrators—who brought the descriptions of each piece—who knew about the pieces that were picked.

Amaya: This is such an interesting, and very collective way to show, enact, and preserve dance history. What is your interest in enacting dance history and its tradition?

Stamer: There is a very long answer I could give which has to do that language and dance have a certain bond—which still a lot of dance makers following the modern dance approach would somehow deny – but that would lead us into the depths of dance theory. I am not so sure if we preserve dance history with this project, but we try to highlight the notion and challenges of how to talk about and with dance. Watching dance on stage or on video is not limited to the visual realm—it is always already challenged by our language machine which tries to make sense of it. Even if we try to suspend or ban language when it comes to the “aesthetic appreciation” of that art form, even if we render language silent, that silence is very talkative. It says a lot about how we make sense of dance. We are communicating beings, whatever we do, we emanate signals, signs, behaviour, and these manifestations are open for interpretation. And these interpretations at some point get in touch with what language has produced and constantly produces.

Amaya: What kind of feedback have you received about “A Piece You Remember to Tell—A Piece You Tell to Remember”?

Stamer: People have approached us and told us how much they like the idea and the project—and not just spectators, [but also the] participants, who have expressed how much they enjoyed doing it. The word “enjoy” is recurrent actually. There seems to be a pleasure re-enacting or re-playing or rendering a project. And actually, we also enjoy that the creativity of people who are capable of doing more than a mere literal reproduction of something they have just witnessed. Watching both renditions I felt somehow touched by that enormous power of creativity in the Berlin scene—it really gave me goosebumps. There is something in that both playful holiness and solemn playfulness that excites me. How a dancer is confronted with the task of memory, and then remembers fluently and then at a certain moment forgets and has to come up with something without betraying that (already-lost) memory. The beauty of dancers playing seriously is what fascinates me: they have a clear task, but how they individually deal with it is sometimes just surprising and mind-blowing. And this is, by the way, why Silke and I don’t join in when the group takes their bows. They have turned this task into their piece of work.