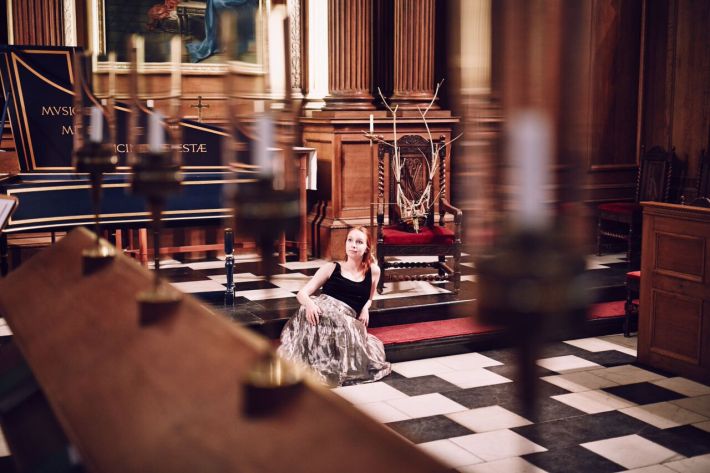 If one stepped back from the wallowing mire of May Week into Clare chapel last Friday, one would have come across, as Actaeon came across Diana at her toilet, the prospect of the chapel metamorphosed into a sylvan scene of nymphs and huntsmen and golden trees, a delicate retreat to be filled with exquisite music.

And it undeniably was filled with exquisite music. Charpentier’s Actéon is the sort of small late 17th century opera that, much like its contemporary, Purcell’s Dido and Aeneas, succeeds in exciting and moving the audience without grand and exaggerated gestures. Its emphasis on liberté, and Actéon’s loss of it, was not the music of the people baying before the Bastille, but an expression of yearning for freedom from the tumult of the city and from the disorders of love, for inner peace and quietude. This presentation of the opera – in music, staging, and ambience – excellently evoked such qualities.

Of the singers, Rowan Haslam, singing the (curiously female) role of Actéon, shone most brightly, navigating the tragic arc from hunter to hunted with charm and versatility. The part  of Juno, who made a brief and haughty entry towards the end, was formidably executed by Judith Lebiez, who filled the space with such power and stature as is befitting of the queen of the gods.

The soloists found themselves backed consistently by a solid chorus and a small baroque orchestra. In particular the latter, led by Naomi Woo, was clear, pure, and delightful, and played with such a consistent sensitivity to order and proportion that it struck one deeply and intensely, though like the jets of a Versailles fountain rather than the raging torrent of a mountain river.  There were at times some issues with the balance of the instruments and voices across the chapel, and the complexities of the space probably account for the disconcerting lag of a tambourine at one point. Nonetheless, musically it was a distilled and unadulterated delight, and a veritable point of catharsis towards the end of May Week.